Ever since my most profound mystical experiences I have been called to go deeper on the spiritual path. At times, I had visions of leaving it all behind, becoming a monk, and living in a monastery somewhere in the mountains. Being a family man, with a wife and two children this no longer seemed like an option to me. I know Gautama Siddhartha (The Buddha) also had a wife and a child when he set off on his spiritual quest but this was not something I could bear doing. Nonetheless, I knew that having prolonged periods of alone time to do deep inner work was something I needed to integrate into my life.

A silent meditation retreat has long been in my plans but both family obligations and the pandemic situation were barriers to its fruition. Then as the coronavirus started dying down and the world was beginning to open up my wife told me that she would be taking the kids to spend a week with her mom in the Poconos. Here was my golden opportunity to go on retreat. I started searching for any available retreats for that week but found that most meditation centers were still closed. I made a post on Dharmaoverground ( a meditation forum) and got recommended Monastic Academy.

What is Monastic Academy?

Monastic Academy is a mindfulness learning center and a modern-day Monastery located in the beautiful woodlands of Lowell Vermont. You can visit the center as a guest or join as an apprentice. Those that complete the apprenticeship can apply to become full-time residents at the monastery. Aside from living and training there, the residents do the work necessary to keep the monastery running. What makes Monastic Academy different from traditional monasteries is that they provide a unique environment that embraces both entrepreneurial work and mindfulness training.

Looking at the Monastery’s event schedule I saw that the week I wanted to come was not an awakening week, instead, there was a circling and emotions retreat scheduled. The retreat event page stated that during this retreat we would be working to understand and process our emotions within the context of a relating practice known as circling. I have never heard of circling before but both relationships and emotions were things I was interested in working with. At this point, it became clear that although this was not the silent retreat I wanted, this was my best bet given my tight schedule. I had convinced my wife to give me a few extra days, making my available retreat time a total of ten days. The circling and emotions retreat was only 5 days long leaving me with an extra 5 days to meditate.

I reached out and spoke to one of the residents working there who informed me that I could come early and leave later therefore I can attend the circling and emotions retreat and also have some extra days to focus solely on my meditation practice. I was happy to hear about this flexibility and decided to book my upcoming stay at the Monastic Academy.

After a 5.5 hour drive from Brooklyn, I arrived in the beautiful woodlands of Lowell, Vermont. Upon entering the monastery I was greeted and led to my room. As I was previously informed the monastery had a strict no fragrance policy due to one of the residents having a severe allergy. My clothes and cosmetic items passed the sniff test but what I was wearing didn’t adhere to their dress code. Apparently, I had missed the part about not wearing bright colors. I was instructed to change into something more suitable and was offered clothes in case I didn’t have something that conformed.

From there I was led through an orientation and given a tour of the monastery. The main hall on the bottom floor connects to a kitchen and to a hallway that leads to several offices and lounges. A staircase in the main hall leads up to a loft. A staircase towards the back of the center leads up to the second floor where the bedrooms are located. Upon exiting the main building there is a path that leads to the zendo, the area where most of the meditation happens. Right in front of the center, there is a pond that reflects the sky and surrounding lush landscape.

After being shown around I was indoctrinated into the monastic culture. I was told about the mandatory chanting and meditation periods and given instructions on the monastic way of eating. Before eating, there is a specific way in which the napkin must be unfolded and how the utensils and the bowl must be placed. After eating, the bowl is filled with hot water, cleaned with a piece of fruit, and then the water is drunk to prevent wasting any food. One of the monastery’s goals is to create as little waste as possible therefore they employ a rigorous way of recycling, ensuring the full use of every piece of material. After my orientation, I did some meditating alone and then later together with the group. We finished the day off by chanting the Buddhist chant of compassion “Om mani Padme Hum”.

On my first morning, I had to be in the zendo at 4:40 am for the daily group chant. We did several chants, one, in particular, was very rigorous and called for a movement of the body that engaged the chi energy in the core. After the group meditation, there is an exercise period in which residents and guests are encouraged to get a sweat going. After exercise is breakfast which I skipped as I prefer to fast for the first part of the day. Then began the work periods for apprentices and residents. Being a guest I used this time to get more meditation in. Around 12:30-1 pm, a simple but hearty vegan Lunch was served which usually included rice, two cooked vegetable dishes, fresh salad from the garden, and nuts. By late afternoon the energy started picking up as everyone was anticipating the arrival of more guests and the beginning of the emotions and circling retreat.

During the emotions and circling retreat, guests were allowed to skip the morning chant and meditation periods. This was helpful considering that much of the circling work went late into the night. I still got my daily morning meditation sits in but I skipped the chanting on the retreat days to get a little more sleep. To say that the emotions and circling retreat was transformational is an understatement. It allowed me to better understand how I show up in the world and how to foster deeper, more meaningful connections with others. My experience circling was so impactful that I am now considering becoming a certified facilitator in this powerful relational technology.

After the emotions and circling retreat ended the energy at the center dropped off. Many of the guests left and the informal social lunches became silent lunches with chanting. Then the Monastics decided that they would be having a 2-day mini awakening retreat. This is exactly what I initially wanted. No more circling or socializing meant I could finally direct all my focus on my meditation practice. Ironically, my motivation to meditate began to wane. I don’t know if it was the sudden transition from intense socializing to virtual silence or because most of my meditation sessions throughout my time here were unpleasant but I just didn’t feel like meditating.

The first week at the center I was riding a high but now I felt my awareness cloaked in a haze of misery. Between having to wake up at 4:20 am to chant, being sleep deprived, doing chores and grounds work, having no social interaction or motivation to meditate I was beginning to question why I was here in the first place. I felt utterly alone and wanted to go home. And through all this discomfort I was learning something profound. I was noticing ever more subtle ways in which my mind was seeking to escape the current moment. At last, I could see the purpose of a monastery. It’s not about doing what you want or like. It’s about going beyond likes or dislikes. It’s about clearing your mind of delusion and seeing reality as clearly as possible. It’s about transcending the ego and awakening to your true nature. 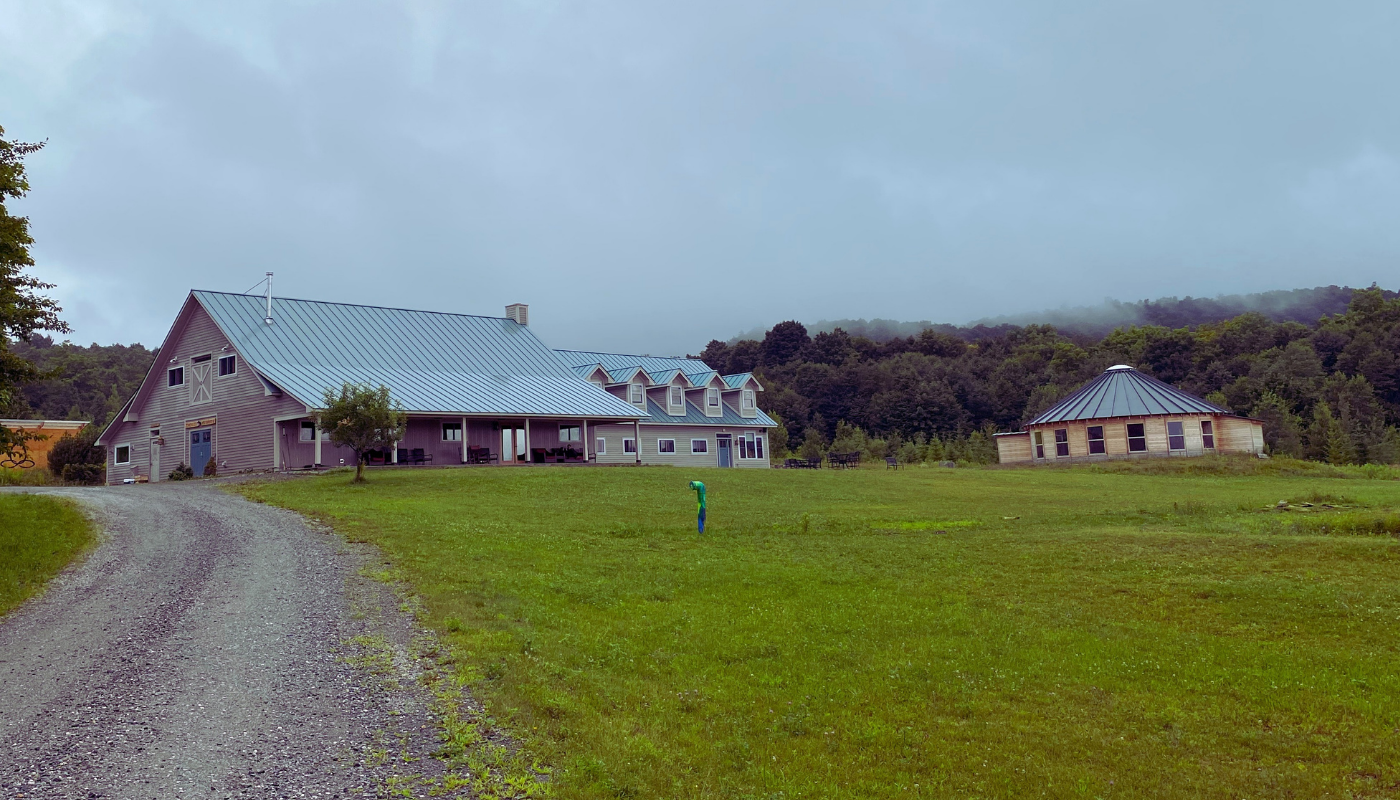 The time I spent training at Monastic Academy was nothing short of transformational. The conscious container stimulates a level of growth that is rarely catalyzed in other environments. I found the atmosphere there to be filled with a scent of tough love. The residents and teachers are there to both push and support each other in the awakening process.

Countless times I saw residents breaking down emotionally. At first, I thought some of the people here were just miserable and neurotic. But after spending more time doing the formal training I recognized that the people here weren’t any less happy than most people living out in the “real world”; they were just dedicated to facing their suffering instead of running from it. They were doing the deep inner work that most people avoid doing.

In the past, I have thought if I could only go train in a monastery then I can focus on my meditation practice and not have to deal with the trivial nonsense of relative reality. Yet here I was in a monastery struggling to focus and feeling great despair. Here were monks with space and time that many of us wish we had yet this space and time often made evident how much they missed family, friends, and intimate connections. When we fail to recognize that all paths have their struggles we fall for the notion that the grass is greener on the other side.

The training at the Monastic Academy isn’t for the faint of heart. The early rise times, mandatory chanting and sitting, work and chore periods along with critical feedback can crack the armor of even the toughest cadets. It’s not that this training is hard to do, it’s hard to do consistently day in and day out. I only experienced 3.5 days of the more rigorous training; some of the residents at the monastery have been doing it for years. They wake up at 4 am every day. They chant and meditate for hours each day. They do the work that needs to be done regardless if they want to do it. They rarely leave the center and have few if any indulgences to help them run away from mental discomfort. And for the challenges they face they also have a growth-oriented environment that supports and nourishes their development.

If I could choose to live as a monk would I? I must admit there is something beautiful about monastic life. There are ways of being that I would like to embody more, that are not as supported in the outside world. Yet there are also aspects of life that I value which can’t be experienced living in a monastery. Regardless of what I want my life is as it is. I am a family man with a wife and two kids. Even if it is limited, I am blessed to have the time for a dedicated meditation practice at home. And if there is anything that my stay at the monastery taught me is that my life is my spiritual practice, whether that’s changing diapers, running a business, or emotionally supporting my wife. We don’t sit on the cushion to escape life, we sit to become more open and responsive to it.

← How to Become a Skilled Meditator What is circling? The Transformative Authentic Relating Practice →