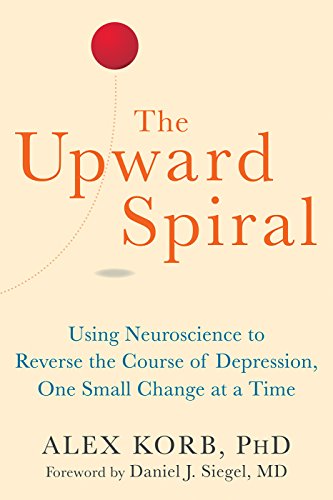 The Upward Spiral by Alex Korb

In  “The Upward Spiral” Alex Korb shows us how to use neuroscience to reverse the course of depression. Packed with practical tips this book can serve as a vital part of a mental health strategy. It even inspired the creation of my ebook “The Definitive Guide to Defeating Depression”.

-Sometimes everything just feels difficult and pointless. It’s a feeling we all get from time to time, and it’s simply a natural byproduct of our complex brain circuitry. And for most people, it’s just a fleeting feeling, gone like a whisper. But due to slight differences in neurobiology, some people get stuck.

-Depression generally involves a problem with how the thinking and feeling circuits in the brain get out of whack.

Chapter 1 – A Brain Map of Depression

-In depression, there’s nothing fundamentally wrong with the brain. It’s simply that the particular tuning of the neural circuits creates the tendency toward a pattern of depression.

-Everyone has depressive tendencies to a varying degree

-Your brain is composed of billions of neurons, tiny nerve cells.

-Neurons are constantly talking to each other by firing electrical pulses down their long branches. When an electrical pulse reaches the end of a branch, the neuron squirts out a chemical signal, a neurotransmitter.

-Neurotransmitters transmit information by floating into the space between the neurons – the synapse — and binding to the next neuron.

-Each electrical pulse — and a resulting squirt of neurotransmitter – is like a vote on what the next neuron should do.

-By changing the firing rate of neurons in a few key regions, you can influence the pattern of activity in the entire brain.

-Dopamine — increases enjoyment and is necessary for changing bad habits

-Melatonin — enhances the quality of sleep

-This is an oversimplification, but in general, each neurotransmitter contributes to a different depressive symptom. A dysfunctional serotonin system is responsible for a lack of willpower and motivation. The difficulty in concentration and thinking is probably due to problems with norepinephrine. Dysfunction in the dopamine system leads to bad habits and lack of enjoyment.

-Depression is not just a manner of a chemical in-balance. But increasing levels of some of these neurotransmitters is part of the solution.

-Our big prefrontal cortex gives us a huge evolutionary advantage, but it can also cause problems. In depression, it is responsible for worrying, guilt, shame, problems with thinking clearly, and indecisiveness.

-The ventromedial prefrontal cortex thinks about emotions, while the limbic system feels them.

-People with depression often have higher amygdala reactivity, so reducing that can help lower anxiety and relieve depression.

-Context-dependent memory states that it’s easier to remember things that relate closely to your current situation.

-Because the “context” is depression, all those happy memories that are easy to recall when you’re in a good mood suddenly evaporate. Meanwhile, all the tragedies in your life become too easy to remember.

-Depression is often accompanied by bad habits such as impulsiveness, poor coping skills, addiction, and procrastination.

-Difficult concentrating is another symptom of depression

-The small hippocampus is likely the result of chronic stress, which can damage and kill neurons. Depression is stressful and thus disrupts the proper functioning if the hippocampus.

-Your early childhood depression experiences, current life stress, and level of social support can influence your circuitry toward or away from depression.

-Your genes aren’t your destiny but they can influence the development of certain circuits and increase your risk for depression.

-It’s not the number of friends you have that matters, but the quality of those relationships.

Chapter 2 – Trapped with Anxiety and Worry

-If you tend to worry, reduce your options and make quick decisions whenever possible. As soon as you make a decision, however small, everything starts to feel more manageable.

-When you’re in a negative mood, almost all outcomes that your prefrontal cortex can calculate are tinged with a bit of negativity.

-Worrying is mostly thought based, whereas anxiety has more to do with physical components like bodily sensations (such as an upset stomach) or associated actions (like avoiding a situation).

-Worrying is thinking about a potential problem, and anxiety is feeling it.

-Pay attention to what you CAN control to reduce anxiety

-Pay attention to the things that are happening NOW helps reduce anxiety and worry, because it decreases emotional, self-focused processing in the ventromedial prefrontal cortex.

-The brain’s inherent emotionality is exaggerated in depression. For example, one study showed that people with greater depressive symptoms, as well as those at risk for depression, were more likely to interpret neutral facial expressions as being sad.

-All of our brains react more strongly to negative events

-On average we need 3 positive comments for every negative one

-One version of the gene that encodes for the serotonin transporter molecule significantly increases your likelihood of developing depression. People with this copy of the gene have brains that pay more attention to negative emotions and less attention to positive ones.

-Practice Nonjudgmental awareness which means noticing without reacting emotionally, even when things don’t turn out as you expected.

-Noticing a mistake might automatically trigger the emotional amygdala, but becoming aware of your own reaction activates the prefrontal cortex, which calms the amygdala.

-The anterior cingulate is on by default. It’s always looking over your shoulder watching for mistakes.

-A hug, especially a long one, releases a neurotransmitter and hormone called oxytocin, which reduces the reactivity of the amygdala.

-Surprisingly simple things can increase norepinephrine such as exercise, a good night’s sleep, and even getting a massage.

-Another way to strengthen optimism circuits is not just recognizing that good things could happen, but expecting that they will happen.

-The prefrontal cortex is the only part of the circuit that cares about your long-term well-being, but unfortunately, it often gets outvoted.

-The problem is that the dopamine that is released in anticipation of pleasure actually motivates the actions that lead to that pleasure. Each step along the way gives you a little boost of dopamine that propels you on to the next step.

-Each time you follow the same path, it becomes more and more defined in your brain — in other words, the neurons in the dorsal striatum are wired together more strongly.

-Once a pattern is established in the dorsal striatum it is pretty much there for good. This is why you never forget how to ride a bike.

-You don’t actually eliminate old habits — they just get weaker as you create newer, stronger ones.

-Everyone has coping habits; they are some of the deepest, most ingrained routines we have.

-Good coping habits can pull you out of an impending downward spiral, because the dorsal striatum takes over and sets your life back on course.

-But bad coping habits don’t stabilize your mood in the long term, so acting them out creates more stress later on, and down the rabbit hole you go.

-The case of all addictions: if you don’t act on your habit, you feel anxious, which makes you want to act on the habit even more.

-To get rid of a destructive coping habit, you can’t just stop doing it, because then you’re left with the stress. Instead, you have to replace it with another habit.

-When you’re calm and relaxed, your prefrontal cortex is pretty good at getting its way. But the more anxious or stressed you get, the more the power shifts to the dorsal striatum and nucleus accumbens.

-Your brain does not like being idle; it comes with a body, and it wants to use it.

-Exercise increases brain derives neurotrophic factor (BDNF), which are like steroids for your brain.

-Movement increases the firing rate of serotonin neurons, which causes them to release more serotonin.

-Exercise causes your brain to release endorphins, neurotransmitter that act on your neurons like opiates by sending a neural signal to reduce pain and provide anxiety relief. (Runners high)

-Making decisions includes creating intentions and setting goals — all three are part of the same neural circuitry and engage the prefrontal cortex in a positive way, reducing worry and anxiety.

-Deciding on goal and then achieving it feels more rewarding than if something good happens to you by chance.

Chapter 7 – Give your brain a rest

-Sleep hygiene is the combination of your actions and the environment that precedes sleep or potentially interferes with it, including your bedtime routine, or lack thereof, as well as the level of noise and light in your bedroom. It also includes the time you go to sleep and wake up, and the amount of light and exercise you get during the day.

-Looking at bright lights after dark disrupt your circadian rhythm

-Circadian rhythm is also disrupted by changes in your bedtime

-If you have insomnia, you’re more likely to develop depression, and vice versa. The connection between insomnia and depression probably has many causes, but one big culprit is communication between the prefrontal cortex and limbic system during sleep.

-When you have good sleep hygiene, your brain releases melatonin approximately thirty minutes before it’s planning to go to sleep. Melatonin release and sleep are both improved by exposure to sunlight.

-Our biggest increase in pain comes from disrupting sleep throughout the night. That means the most important factor is not the total amount of sleep, but the amount of continuous sleep.

-Stress biases the brain toward old habits over intentional actions, which is one of the reasons it is so hard to change coping habits.

-if you don’t use a coping habit you become more stress wanting to use the coping habit even more. The best solution is to find other ways to reduce your stress.

-Massage boosts your serotonin by 30%

-In depression, people tend to inadvertently generate many negative types of biofeedback — for instance, a timid or withdrawn posture, usually accompanied by shoulders slouched down and forward, increases their feelings of sadness.

-Higher heart-rate variability is due to greater vagal tone

-You can initiate positive bio-feedback through laughing and smiling

-When you start to feel anxious or stressed or angry, notice if your brow is furrowed. Try relaxing your forehead, and it should help diminish the feeling.

-Slow breathing increases activity in the vagus nerve and pushes the brain toward parasympathetic activity.

-Gratitude is showing actual appreciation for the things you have

-It’s not finding gratitude that matters most; it’s remembering to look in the first place.

-Remembering to be grateful is a form of emotional intelligence.

Chapter 11 – Rely on the Power of Others

-Even though you may feel like being alone, the cure to depression often lies in other people.

-People with low self-esteem have even greater anterior cingulate activation, suggesting their brains are more sensitive to social rejection.

-Interacting with others pushes the brain towards an upward spiral

-In one study participants had to put their hand into a bucket of ice water and hold it until the pain became overwhelming. Those who were accompanied by a friend or even a stranger experienced less pain.