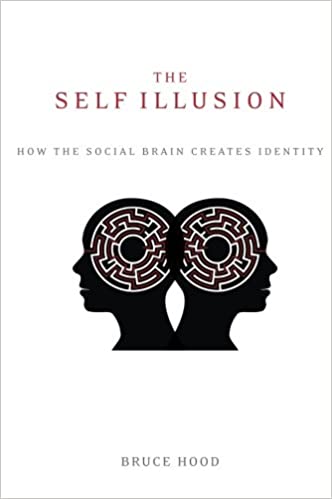 The Self Illusion by Bruce Hood

The Self Illusion By Bruce Hood uses a western and scientific perspective to illuminate what the great spiritual traditions have been teaching for thousands of years. There is no such thing as a solid or stable self. Instead, our identity is highly malleable and continuously reconstructed through our interactions with others. I recommend this book for those that have not been able to accept the Buddhist doctrine of “No Self” and require a more scientific approach for challenging their beliefs. Filled with countless studies this book can help even the most skeptical see through the illusion of the ego.

-The self-illusion makes the fundamental attribution error easy to accept

Chapter 1 – The Most Wondrous Organ

-Each of us really does have a matrix in our brain. This is because of brains are constructing simulations or stories to make sense of our experiences because we have no direct contact with reality. This does not mean that the world does not really exist. It does exist, but our brains have evolved to process only those aspects of the external world that are useful to us.

-We now know that the unborn baby can learn the sound of his mother’s voice, develop a preference for the food his mother eats while pregnant, and even remember the theme tune to the TV soap operas his mother watches while waiting for the big day to arrive.

-Those species that spend longer in childhood (The R&D phase) end up with a larger repertoire of skills and, not surprisingly, also end up the most sociable.

-You need big brains to think about people so that you can negotiate the best path through the social landscape.

-Six-month-old infants recognize both human and monkey faces. However, by 9 months, babies lose the ability to tell the difference between monkey faces, much as we do as adults.

-Initially, babies like everyone but that changes somewhere around the first half-year of life

-Infants younger than 6 months recovered fully from social deprivation, but older infants were increasingly at risk of problems later in life

-The Romanian orphanage studies reveal that there is something deeply fundamental about our need for interaction with others that makes social psychological development essential for our well-being.

-When we act socially, we think that we are calling the shots and pulling the strings but this belief in autonomy is part of the illusion. We are much much more dependent on others than we appreciate.

Chapter 3 – The Looking Glass Self

-No real identity exists separately from the one created by others

-Episodic memories reflect the actual experience of remembering the episodes that punctuate our lives. Memories of these episodes are crucial for constructing the self story, and those that are particularly personal are known as autobiographical memories.

-Memories are constantly active — like a story being retold over and over again. Moreover, when we encounter related new experiences, we interpret them in terms of our existing memories, which in turn are transformed by the new experiences.

-If we all can vividly remember events that never happened, then this undermines the reliability of memory and ultimately the reality of our self.

-People tend to place greater faith in the accuracy, completeness, and vividness of their memories than they probably should.

-If we discover that an episode never really happened, then our whole self is called into question. But that’s only because we are so committed to the illusion that our self is a reliable story in the first place.

-Before you can be self-conscious, you must first appreciate that others are thinking about you. You need to have a concept of what you are in order to compare that self with the expectation of others.

-When you understand that people can hold false beliefs, you can lie to them to make them think something that isn’t true. When you consider how so much social manipulation involves deceiving others, you can understand why having a theory mind is a valuable tool.

-An underdeveloped theory of mind in children also explains why they can make such bad liars.

-Counterfactuals are what enable you to imagine different scenarios, including what people may do in the future based on what you know now.

-By the time they reach their teens, adolescents believe that others are constantly judging them even when this is not the case. They think they are the center of attention and are hypersensitive to criticism.

-Our interaction with children reinforces these gender divisions. Mothers tend to discuss emotional problems with their daughters more than with their sons. On a visit to a science museum, parents were three times more likely to explain the exhibits to the boys than to the girls.

-If an environment is lacking in appropriate role models and examples of how to behave and treat others, then children reared in it fail to develop an appropriate moral dimension to their sense of self.

Chapter 4 – The Cost of Free Will

-Any choices that a person makes must be the culmination of the interaction of a multitude of hidden factors ranging from genetic inheritance, life experiences, current circumstances, and planned goals.

-Quantum physics has revealed that the basic building blocks of matter, the elemental subatomic particles, behave in decidedly unpredictable ways. They are known as “indeterminate” — as opposed to determined.

-Our belief in free will not only reflects our personal subjective experience of control over our actions on a daily basis, but also our own ignorance of the mechanisms, both conscious and unconscious, that determine our decisions.

-Multiple Realizability ….Many different patterns of brain activity can produce the same thoughts and behaviors

-When we think that we are consciously making a decision, it has already happened unconsciously. In effect, our consciousness is living in the past.

-Hypnotism works because not only do we instinctively mimic others, but we also tend to do what they ask of us in the right situation.

-We become susceptible to the influence of others we wish to please. This is because we are naturally inclined to be compliant toward others.

-Suppressing our feelings makes us vulnerable to temptations.

-Adopting public personas that are at odds with our true emotional profiles may come at a cost.

-When we believe in free will, we enjoy life more.

Chapter 5 – Why Our Choices Are Not Our Own

-Cognitive Dissonance protects the self from conflicting stories and is at the heart of why the self illusion is so important, but it also reveals the danger that a strong sense of self can create.

-We are fools to believe that our self is making decisions independent of the external context.

-We believe that we are safer when we think we are in control of our fate, such as when driving our own car, but feel unhappy when we are being driven by others or, worse still, flown around in a metal cylinder that can fall out the sky, irrespective of what we do.

-Perceived control attenuates the pain centers of the brain.

-If there are too many choices, then the alternatives cancel each other out and we are left with indecision.

-The preference for the midrange price is why retailers often have an expensive option to increase the likelihood of customers choosing a products that costs less but is not the cheapest.

-If relativity is all that we can ever know, then this means that our self is defined by the values against which it is matched.

-Objects serve an important function as ostensive markers for self-identity.

-When something becomes mine, I pay more attention to it in comparison to an identical object that is not mine.

Chapter 6 – How the Tribe Made Me

-People trigger our emotions reflexively. As soon as we are in a crowd we become aroused. The limbic system that controls our behavior responds automatically to the presence of others.

-When we identify someone as belonging to a group, which, in turn, influences how we behave toward the person.

-Just belonging to a group shapes our self because we automatically identify with other members.

Chapter 7 – The Stories We Live By

-Memory is information stored as a pattern of electrical activity that “re-presents” the original pattern at the time it was formed.

-The problem with self-narratives is that we are the ones writing the story, which means our myths are open to all manner of distortions of what we think we should be like. This has been called the “totalitarian ego,” in which we repress, distort, and ignore negative aspects of our lives that do not fit with our idealized self-narrative.

-The Big-Five factors of personality might be reliable within an individual in one role, they can completely change in another.

-Positive Illusions (that we are better than most others) may actually be beneficial to our mental well-being.

-Armed with these positive illusions, we feel that we have more control over situations when, in fact, we have little or none.

-Positive illusions mean that we tend to see positive outcomes as a direct consequence pf our actions, whereas negative outcomes are someone else’s fault.

-If you prime individuals from either the East or the West to think more individualistically or collectively, then they recall more personal or group-oriented memories accordingly.

-Even the memories we recall to define our self-story are defined by the groups to which we belong.

Chapter 8 – Caught in the Web

Chapter 9 – Why you can’t see your self in reflection

-Experiences are fragmented episodes unless they are woven together in a meaningful narrative. This is why the self pulls it all together.

-Those who reject the notion of a self in control of destiny, lead sadder, less satisfying lives. Those who embrace the self illusion feel fulfilled and purposeful.

-We think we see a stable visual world but, in fact, it is constructed every time we move our eyes.