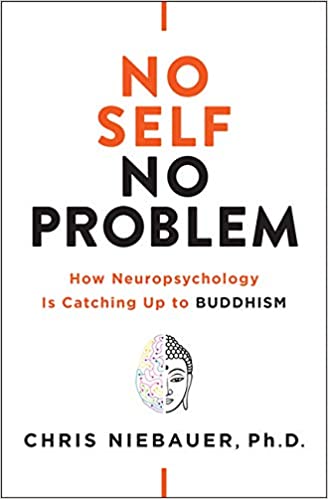 No Self No Problem by Chris Niebauer

In No Self No Problem, Chris Niebauer shows us how Neuropsychology is catching up to what the Buddha taught thousands of years ago. Niebauer explains that the brain is divided into two hemispheres, each of which has a different way of understanding the world. The right hemisphere perceives reality on a more fundamental level which the left hemisphere then interprets. The problem is the left hemisphere is often wrong in its interpretation which causes us to believe untrue stories and experience suffering in our lives.

The fundamental narrative of the left brain is that of a distinct, separate self also known as the ego. In every moment the left brain uses judgments and beliefs to conjure up who we think we are. It is difficult to see through the ego because it is created by our thoughts which for most of us never stop. As soon as you threaten the ego it finds a new way to reinterpret itself. Nonetheless, we are capable of understanding that the ego is an illusion and in doing so we can start experiencing ourselves and the world in a healthier, more holistic way.

-The left side of the brain created explanations and reasons to help make sense of what was going on. The left brain acted as an “interpreter” for reality. This “interpreter” is often completely wrong.

-Most people are unaware that we have a right-side preference; that is, if you have a number of similar items in front of you, you will have a tendency to prefer the thing in the right.

-Misattributed arousal is the idea that when our nervous system is stimulated or excited — when our blood pressure goes up and our heart beats faster — the left-brain interpreter will make up a story about the origin of this arousal, and often that story is completely wrong.

-Both attraction and dislike can be just another interpretation of the left brain, and the faster our hearts are beating and the more we are sweating, the more intense the interpretation.

-The inaccurate explanations generated by the left brain, as well as the presupposition of this “me”, are the most prevalent causes of internal suffering we experience as humans.

-The big difference between the Eastern spiritual traditions and psychology is that the former has recognized this experientially and the latter did so experimentally (and accidentally, for that matter). And this means that those who study and teach psychology are still largely unable to appreciate what it means to experience the interpreter as a fiction.

-Even though the left-brain interpreter is always on and cannot be turned off, once it is recognized — or that is to say, once we become aware of its constant interpretations — a new awareness of ourselves and the world begins.

-We have become such experts at organizing our perceptions into categories and patterns that it’s difficult to see reality in any other way.

Chapter 2 – Language and Categories – The Tools of the Interpreting Mind
-While the right brain does not control speech, we know from Tan’s case and the research on the split brain patients that it understands the written and spoken word.

-The left brain is the dominant center for language. This includes the inner speech we use when we talk to ourselves.

-Language is a form of map making. In the same way that a map represents a place, language creates symbols, or words, that represent something else.

-The left brain becomes so dependent on language that it mistakes the map of reality for reality itself.

-Our association of our true self with the constant voice in our head is an instance of mistaking the map (the voice) for the territory (who we really are). This error is one of the biggest reasons the illusion of self is so difficult to see.

-Many of us do not see language as a representation of reality, but confuse it with reality itself.

-Categories are based on the left brain’s ability to see differences and create opposites and are formed when things in the world that are continuous are grouped by some common feature and then treated as one unit.

-The conundrum of the left brain: there is a limit to its understanding through categorizing and interpreting, and although we can hit that limit quickly and easily, many people, including some of the most well-known psychologists and Western philosophers, disregard this fact and put all their stock in the power of thinking.

-To interpret is to judge things, and there is no way around this.

-When you become conscious of the interpreter, you are free to choose to no longer take its interpretations so seriously.

-When someone approaches you with a “this is the way it is” attitude, you can appreciate that this person is dominated by the left brain, that they are a servant to its master.

-The left-brain interpreter also creates and sustain a collection of categorical thoughts based on judgments and groups then together as likes and dislikes, ideas of right and wrong, and mental models of how things are supposed to be. We collectively call these judgments our belief system.

-Some of our beliefs we simply can’t change

-“Right” and “Wrong” are only beliefs that become a sickness when we take them so seriously that they become “the way things are.”

-Paradox is a turnoff to those deeply possessed or controlled by the left brain. Paradox is also more attractive to those less identified with the interpreter.

Three – Pattern Perception and the Missing Self

-“Identity is merely a pattern of events in time and space. Change the pattern and you have changed the person.” – Nisargadatta Maharaj

-The left brain uses the tools of language, categorization, beliefs, and judgment to find patterns

-By seeing patterns that are not there, the mind creates stories that aren’t true, and as we’ve previously discussed, this can lead to unnecessary suffering, anxiety, and depression.

-Subjects who had an increased amount of dopamine were more likely to find patterns.

-The self is more like a verb than a noun. It only exists when we think it does, because the process of thinking creates it.

-When the self feels threatened or exposed, thinking shifts in a way to support a new or reinterpreted version of itself.

-When the belief in the safety and security of the self was challenged, another form of self-identity increases.

-The pattern-perception machine in the left brain is a biological function that is working all the time and virtually impossible to stop.

-Simply becoming aware of our brain’s propensity to see patterns, we can begin to take them less seriously.

-The self is like the triangle below… it is an illusion we can’t stop seeing.

-The left brain has created this illusion of self by noticing a pattern of categorical differences between you and others and combining those observations with memory, preferences, and the perspective of the “pilot,” who seems to be steering the ship of the brain and the body.

-Our definition of self depends in part on our difference from others.

-Another way to think of the fictional self or ego is that its addiction to interpreting works like a drug. Every day it needs to get its fix, and it does that in a variety of ways: telling stories about what it perceives, comparing and categorizing itself against others, judging things as right or wrong — and it uses all of these processes to define you as yourself.

-Storytelling and interpretations provide a short-term hit of purpose and meaning but an inevitable crash of suffering.

Chapter 4 – The Basics of Right-Brain Consciousness

-The goal is not right-brain dominance and certainly not to shut down the left brain, but rather to achieve what the Buddha called a middle path.

-One way to get more in touch with the right brain is to cut the left brain out of activities by doing them for no reason — not for money, not to improve oneself, but simply for the sake of doing them.

-The left-brain ego thinks in terms of cause and effect, and in order for an action to be worth taking, it must have a positive outcome

-Doing for its own purpose seems to almost always be connected with right-brain activities from poetry to art to music.

-Once a day, do something for no reason at all.

-Meaning and understanding are two of the vital processes that take place in the right brain.

-There is something about space that slows the mind, since the mind has no way to understand it because it has no content and no container. Therefore, when we shift our awareness to it, the interpretive mind slows down.

-When you listen to someone speak, or when you speak yourself, bring some attention to the silent space between the sounds. Can you sense in the same way a figure is dependent on the background that sound is dependent on silence? Without silence, sound would have no meaning.

-With intuition, knowing happens without explicitly being able to put into words how you know or from where this knowing comes.

-Those who highly identify with the left-brain interpreter will typically conclude that intuition is either silly or superstitious.

-The right brain “speaks” only in emotions, so with self-reflection, we feel our way around thinking to find out what is true for us in a particular situation

-In the absolute acceptance of all emotions, they no longer have control over you because you have given up trying to control them.

-Two emotions that can give us a special window into the right brain are gratitude and compassion.

-All of the unhelpful complaints stem from an over-identification with left brain and the illusory self, for it is only the ego that can object to reality as it is.

-There is a section of the right brain called the right temporoparietal junction (RTPJ) that does nothing else except to think about other people’s perspective.

-The RTPJ isn’t fully developed in kids, and they have a difficult time seeing things from others’ point of view until this area matures.

-Albert Einstein is one of the best-known scientists of all time, a master of a field that is based on logic and rational thinking. However, he was able to perceive the connection between moving in space and the slowing of time in a novel way that wasn’t apparent to anyone else.

-One of the most important questions for modern psychology is finding out when we should trust our intuition and when the left brain might rightly signal us to keep it in check or override it.

-In the West where the left-brain interpreter “master” does not honor the gift of the intuitive mind, very few people learn to develop this form of knowing or put systems in place to guard against its pitfalls.

Chapter 7 – What is Consciousness?

Chapter 8 – Finding the real you

-All play, all adventure, requires a challenge that must be overcome or an evil force that must be fought against and destroyed. The Christians call this evil or sin, the Buddhists call it the three poisons (fear, greed, and delusion), the Freudians call it the id, and Jung called it the shadow, but it’s the same mechanism woven into the fabric of a universe intent on play and an unending mystery.

-If death didn’t seem real, the game would be meaningless.

-What if the way to “win” the game of life is to discover experientially that its all a game in the first place and that you are the creator of the game?

← Inner Work by Robert A. Johnson Cutting Through Spiritual Materialism by Chogyam Trungpa →