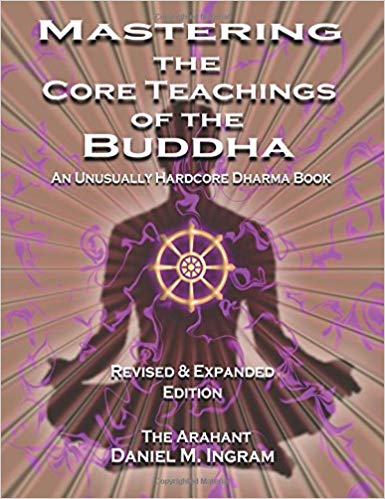 Mastering the Core Teachings of the Buddha by Daniel M. Ingram

Mastering the Core Teachings of the Buddha by Daniel M. Ingram is an extensive exploration of Buddhist Dharma. The self-proclaimed Arhant Ingram lays out maps for navigating meditation terrain in a fashion rarely seen from traditional Buddhist Practitioners. I found this book extremely informative for understanding meditation and Buddhism. It is also a great source for finding other books on meditation and adjacent topics.

“I should add a qualifier here, relating to what a life well lived might mean. For some, that is a Life of riches, decadence, and hedonism. That is not what I’m talking about. It is not that wealth is inherently bad, though there are strong moral arguments to be made for a vastly more equitable distribution of wealth. Is not that all decadence is inherently bad, and I would hate to make someone feel terrible for having a second dessert occasionally, but clearly there is a great degree of spending on luxury that is contributing to the destruction of the planet and behavior that simply leads to more misery for all concerned in the name of “fun “. It is not that we shouldn’t enjoy our lives, as an enjoyable life is a much easier one to accept, but clearly plenty of the pathways people go down seeking enjoyment do predictably lead to more suffering than they produce pleasure or fulfillment. So, with those qualifiers in mind, ponder what a life well lived might mean and aspire to that.”

-Access concentration is when you can keep your attention on your object of meditation second after second, minute after minute, without letting it go to other objects, but before any interesting, blissful, unusually steady alteration of perception happens.

-The instant you have experienced something, you can know that it isn’t there anymore

-Awakening is not a thing or a mind state or a thought, it is an understanding of perspective without some separate entity that perceives

-If you are observing it, then by definition it isn’t you

-Sensations arise on their own in a natural, causal fashion, even the intentions to do things.

-To deeply understand any two of the characteristics simultaneously is to understand the third, and this understanding is enough to cause immediate first awakening.

-Could I perhaps work on strengthening wisdom, faith, or bringing them into balance?

-When energy and concentration mature, the feel is spacious and easy, natural and clear, gentle and broad, rich and subtle, all at once.

The 7 factors of awakening

The four truths of the noble one

1.There is suffering or dissatisfactoriness

2.There is the cause of suffering

3.There is the end of suffering

4.There is the path that leads to the end of suffering

-At some habitual level we wish desperately that there was some separate, permanent self, and we spend huge amounts of time doing our best to prop up this illusion.

-Many people start meditating and then get frustrated with how much suffering and pain they experience, never knowing that they are starting to understand something important about themselves and reality.

Way to deal with thoughts

-If this fails, then the meditator should reflect on the danger in those unskillful thoughts and thus try to condition him or herself not to think such thoughts in this way.

-If this fails, then the meditator should try to ignore those thoughts and not give them any attention.

-If this fails, he or she should give attention to quieting the mind  and to stilling these thoughts.

-If this fails, the meditator should bear down with full will and “crush mind with mind” forcing the thoughts to stop with unremitting and unrestrained effort.

-As the insight-first schools rightfully point out, if we cling to stability, fluidity, or the positive qualities that concentration-heavy practice develops, we will not make progress in insight.

-As concentration-first schools point out, by plunging straightaway into the fast and harsh vibratory experiences of insight practice  without the mental strength, stability, and soothing effects of concentration practice to help stay grounded, we can become uptight, irascible, emotionally brittle, and occasionally insufferable to be around.

1.Set up candle about 4-5 feet away just below your eye level. Make sure the background is something boring or plain.

3.Stare at the Kasina with relaxed eyes until the colors start to bleed around the edges Or when you notice some visual distortion. This might take anywhere from 30 seconds to 2 minutes

4.Then close your eyes and focus on the visual purple after image. Pay attention to this with the exclusion of everything else.

5.If the visuals fade open your eyes and start at step 1 again.

6.After some repetition you will notice something beyond the purple color. If you are using a candle it will be a red dot. Follow the red dot until it fades then start at step 1 again.

7.Continue repeating the cycle over and over. Consistency in a short period of time with few breaks really help make this happen and maintain concentration muscles.

8.At some point the created image will begin to get clearer, brighter, more refined, and more stable. If you are using a candle flame and its subsequent red dot as image, it will tend to gain green, blue, and purple rings around it with intricate yellow rapidly moving fine complex lines in the middle that shift and spin at high speed. Paying attention to that high-speed spinning and movement will develop good attention-tuning skills that translate extremely well to other meditation styles.

9.The more refined dot or image is called the nimitta. The nimitta will eventually do strange things such as oscillate between a black dot and some greenish-yellow dot, or other variants of this theme. As practice grows stronger you will notice that your internal intentions and inclinations have more and more control over what shapes and colors the nimitta becomes.

10.After a while you notice that after looking at the flame and closing your eyes, more of the background of the flame will also generate after-images around the central image. That blackness or visual static in the background can then become what I call “murk”.

11.If you keep paying attention to the black & grey colors of the murk eventually images and colors will emerge out of this darkness.

12.When the murk arises it is better to just open the eyes and cycle back from step 1. The more times we cycle up from the kasina object through the initial organized images to the murk, the more the murk will begin to organize.

-As unpalatable as the three characteristics can seem, in the end they are the source and substance of our complete salvation