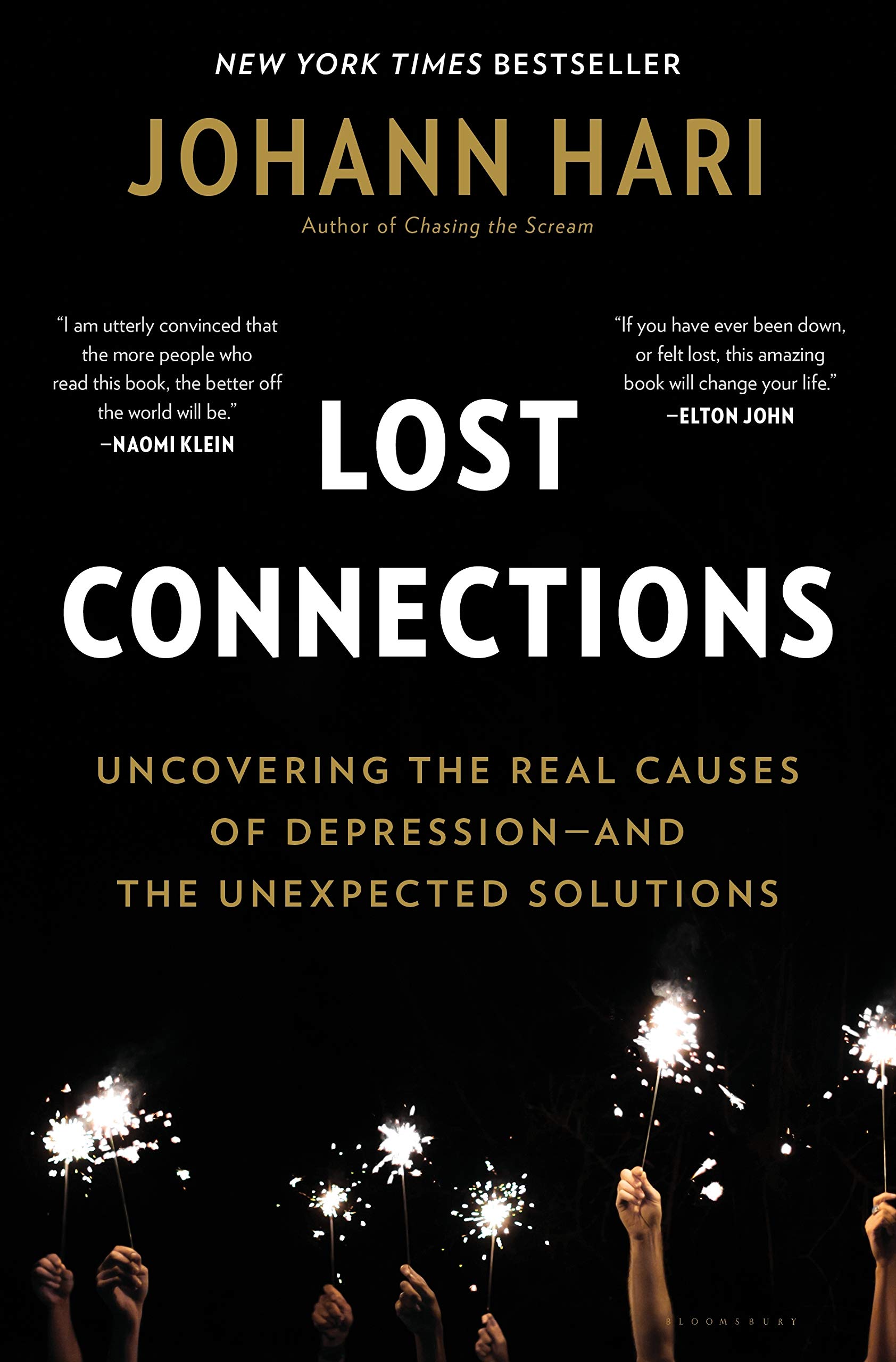 In “Lost Connections” journalist Johann Hari argues that the widespread depression epidemic is a product of disconnection. He goes on to illuminate the various ways we are disconnected and pathways to finding reconnection. This is an extensive overview of society and culture’s role in depression.

-The forces that are making some of us depressed and severely anxious are, at the same time, making even more people unhappy.

Part I – The Crack in the Old Story

-Taking away the story for your pain is just as powerful

-The grief expectation states that you are allowed to show symptoms of depression and not be considered mentally ill if you have recently suffered the loss of somebody close to you.

-What if depression is, in fact, a form of grief — for our own lives not being as they should?

-What if it is a form of grief for the connections we have lost, yet still need?

Chapter 4 – The First Flag on the Moon

Chapter 6 – Cause one: Disconnection from Meaningful Work

-13 % of people are engaged in their jobs which means they are “enthusiastic about, and committed to their work and contribute to their organization in a positive manner.

-A common symptom of depression is something called “derealization “ — which is where you feel like nothing you are doing is authentic or real.

Chapter 7 – Cause Two: Disconnection from Other People

-Feeling lonely, it turned out, caused your cortisol levels to absolutely soar

-Anywhere in the world where people describe being lonely, they will also — throughout their sleep — experiences more of something called “micro-awakenings.”

-When we talk about home today, we mean just our four walls and (if we’re lucky) our nuclear family. But that’s never been what home has meant to any humans before us. To them, it meant a community — a dense web of people all around us, – tribe. But that is largely gone. Our sense of home has shriveled so far and so fast it no longer meets our need for a sense of belonging. So we are homesick even when we are at home.

-Many depressed and anxious people receive less love, as they become harder to be around. Indeed, they receive judgment, and criticism, and this accelerates their retreat from the world.

-Loneliness isn’t the physical absence of other people, it’s the sense that you’re not sharing anything that matters with anyone else.

-The compulsive Internet use, was a dysfunctional attempt to try to solve the pain they were already in, caused in part by feeling alone in the world.

-Materialistic people, who think happiness comes from accumulating stuff and a superior status, had much higher levels of depression and anxiety.

-The more materialistic you become, the shorter your relationships will be, and the worse their quality will be.

-all our values are like slice in a pie …. if one slice gets bigger another has to get smaller

-For every category of traumatic experience you went through as a kid, you were radically more likely to become depressed as an adult.

-Emotional abuse was more likely to cause depression than any other kind of trauma — even sexual molestation.

-If you believe that your depression is due solely to a broken brain, you don’t have to think about your life, or what anyone might have done to you.

-There are three different kinds of causes of depression and anxiety — biological, psychological, and social.

-Psychological damage doesn’t have to be as extreme as childhood violence to affect you profoundly.

-“When people have these kind of problems, it’s time to stop asking what’s wrong with them,” he said, “and time to start asking what happened to them.”

Chapter 10 – Cause Five: Disconnection from Status and Respect

-The more unequal your society, the more prevalent all forms of mental illness are.

Chapter 11 – Cause Six: Disconnection from the Natural World

-Almost all animals get distressed if they are deprived of the kinds of landscape that they evolved to live in.

-Faced with a natural landscape, you have a sense that you and your concerns are very small, and the world is very big — and that sensation can shrink the ego down to a manageable size.

-In one study prisoners whose cells faced nature instead of brick walls were found to be 24% less likely to get physically or mentally sick.

Chapter 12 – Cause Seven: Disconnection from a hopeful or Secure Future

Chapter 13 – Causes Eight and Nine: The Real Role of Genes and Brain Changes

-for depression 37% is inherited

-Sever anxiety is between 30-40% inherited

-You can have everything a person could possibly need by the standards of our culture — but those standards can badly misjudge what a human actually needs in order to have a good or even a tolerable life.

-Believing depression is a disease didn’t reduce hostility, it increased it.

-Depression is largely a reaction to how we are living

-Depression and anxiety have three kinds of causes: biological, psychological, and social.

-It is much more politically challenging to say that so many people are feeling terrible because of how our societies now work.

-Telling people their distress is due mostly or entirely to a biological malfunction has several dangerous effects on them. This leaves the person disempowered and tells you that your distress has no meaning — it’s just defective tissue even when we are distressed for good reasons.

Part 3 – Reconnection. Or, a Different Kind of Antidepressant

-The more you think happiness is a social thing, the better off you are.

-The real path to happiness comes from dismantling our ego walls — from letting yourself flow into other people’s stories and letting their stories flow into yours.

-A major scientific study carried out on Amish mental health in the 1970s found that they have significantly lower levels of depression than other Americans.

-Advertising is a form of mental pollution

-Several countries, including Sweden and Greece, have banned advertising directed at children.

-Just asking these two questions — “What do you spend your money on?” And “What do you really value?” — made most people see a gap between the answers that they began to discuss.

-“Who’s shaping that narrative?” It’s not people who have actually figured out what will make us happy and who are charitably spreading the good news. It’s people who have one motive only — to make us buy their product.

Chapter 20 – Reconnection Five: Sympathetic Joy, and Overcoming Addiction  To the Self

-Sympathetic joy is the method for cultivating “the opposite of jealously or envy….. It’s simply feeling happy for other people.”

-If you can be happy for others, there’s always going to be a supply of happiness available to you.

-Depressed people were significantly more likely to recover from depression if they went into an eight-week meditation training program than people in a control group who didn’t.

-Those who loving-kindness meditation, were almost twice as likely to help somebody than the people who hadn’t.

-“Psychedelics” mean mind-manifesting … what these drugs do is draw things out of your subconscious and bring them into your conscious mind.

-Both meditation and psychedelics break our addiction to ourselves

-Psychedelics most often leave people with a profound sense of connection — to other people, to nature, and to a deeper sense of meaning.

-Depression is a kind of constricted consciousness

-Psychedelics show you the possibility of how connection can make you feel. But it is up to you to find other ways to maintain this experience in your everyday life.

-Childhood trauma makes you far more likely to be depressed or severely anxious as an adult.

-Patients who had their trauma compassionately acknowledged by an authority figure seemed to show a significant reduction in their illnesses — they were 35% less likely to return for medical help for any condition.

-It’s not just the childhood trauma in itself that causes problems by the hiding of it…. not telling anyone because you’re ashamed.

-Closeted gay men, during the AIDS crisis, died on average two to three years earlier than openly gay men, even when they got health care at the same point in their illness.

-In the United States if you have an income below 20k, you are more than twice as likely to become depressed as somebody who makes 70k or more

-“Mental health is produced socially: the presence or absence of mental health is above all a social indicator and therefore requires social, as well as individual, solution.”