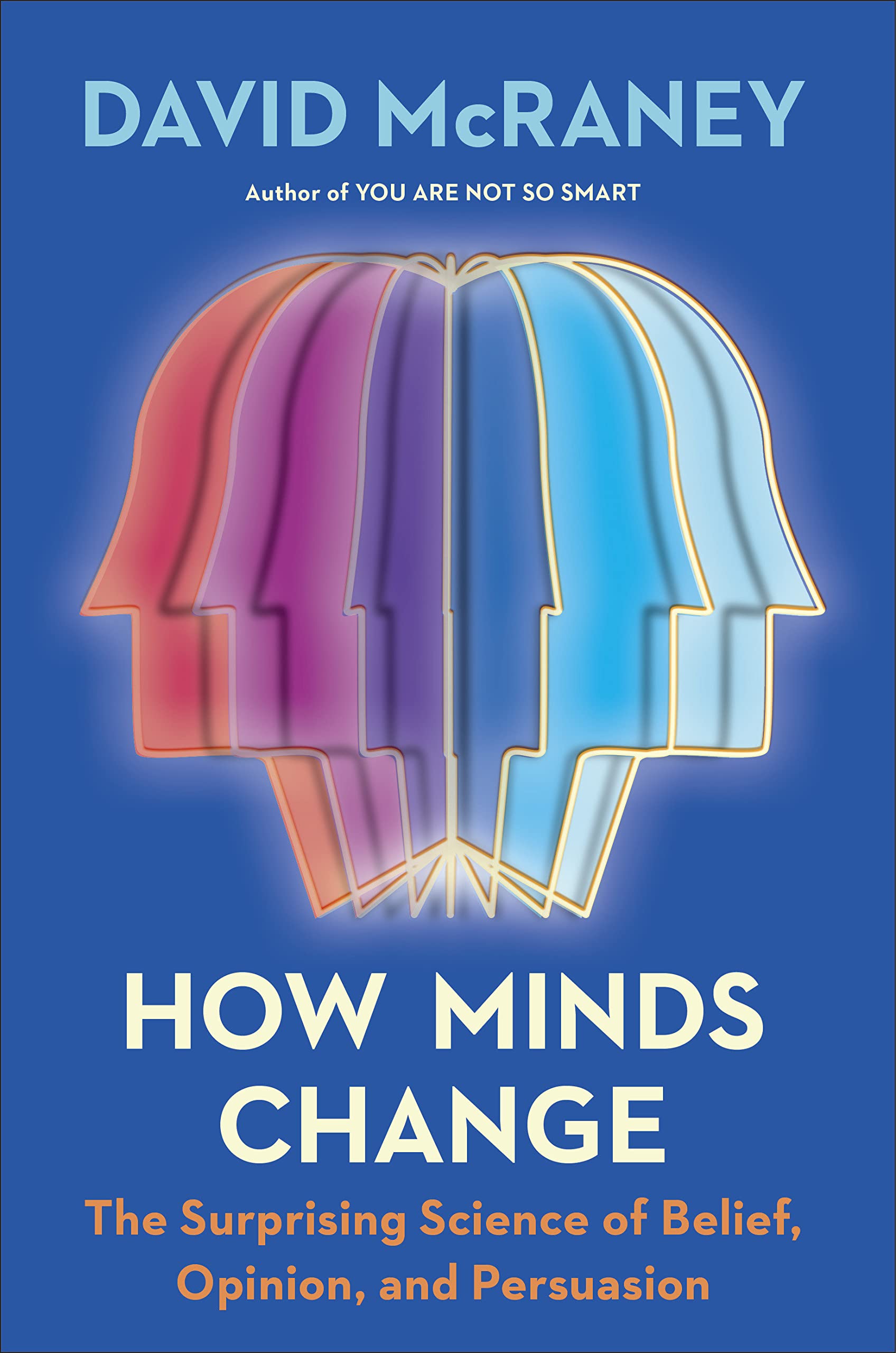 In “How Minds Change” David McRaney explores the surprising science of beliefs, opinion and persuasion. Combining his in-depth knowledge of psychology with extensive experience of navigating difficult conversations, McRaney illuminates the hidden mechanisms that lead someone to change their mind. This book will not only make you better at changing people’s minds it might even make you change your own.

*All sentences in quotations are direct quotes from “How Minds Change” and are attributed to David McRaney. Bold is added for skimmability.

How Evolution pressures us to change our minds

Why we disagree on reality

Why “truth” is tribal

Why we need to argue

The Psychology of paradigm shifts

“The ability to change our minds, update our assumptions, and entertain other points of view is one of our greatest strengths, an evolved ability that comes free with every copy of the human brain to leverage that strength, we must avoid debate and start having conversations.”

When persuasion works and when it doesn’t:

“All persuasion had to take into account “who says what to whom in which channel and with what effect.”

1.“Who: The communicator must seem trustworthy, credible, and reliable.”

2. “What: A message becomes more impactful when paired with popular counterarguments, what psychologists call a two-sided communication.”

3. “To Whom: A message must match the processing abilities and motivations of its audience.”

4. “In Which Channel: The message should fit the medium through which it is conveyed.”

Deep canvassing is a form of conversation that uses empathic listening to change someone’s mind. This process was created by the Los Angelos LGBT center in order to sway voters’ perspectives on gay rights.

The process of Deep Canvasing:

“The cleaner, simpler approach seems best,” he said. “I show up at your door. Tell you a sympathetic story. Listen to yours. Through that you begin to humanize and empathize and demystify one another. That seems to be doing most of the work.”

Street Epistemology is a type of conversation that seeks the explore the basis of one’s reasoning and beliefs. The term was originally coined by professor Peter Boghossian.

The process of Street Epistemology:

1. ESTABLISH RAPPORT – “The quickest way to end a conversation before it begins is to communicate hostility. Anything that can be misconstrued as “you should be embarrassed for thinking that way” will be met with anger.”

2. ASK FOR A CLAIM – “Street epistemology works best on empirical, fact-based claims like “the Earth is flat” or “the government is listening to our Alexas,” but it can also be used to explore attitude-based claims like “Joe Biden is a bad president” or “strawberry ice cream is better than vanilla,” or values-based claims like “tax dollars should go to forgiving student loans, not aircraft carriers.””

3. CONFIRM THE CLAIM – “Repeat back to the other person in your own words: “If I understand you correctly, you are claiming that . . .””

4. CLARIFY DEFINITIONS – “The problem with most arguments is that we often aren’t actually arguing, because our definitions of the terms aren’t the same as theirs.”

5. IDENTIFY A CONFIDENCE LEVEL – “The conversation truly begins after step five. Ask them to put a number on their feeling of confidence, from zero to one hundred, so they can begin to step backward into their processing and ask themselves how sure they are about that feeling.” If a person says they are an eighty out of one hundred, you can ask: “Why not one hundred?” Which then opens up the conversation to the next phase, exploring a person’s reasoning.”

6. IDENTIFY HOW THEY ARRIVED AT THEIR CONFIDENCE LEVEL – “one of the most important questions we ask a person is, ‘If you discovered that was not a good reason for holding a high degree of confidence in what you think is true . . . is true, if you discovered that on your own or through this dialogue, would it lower your confidence?’ And if they say, ‘My confidence wouldn’t change even if I discovered that reason wasn’t good’, you’ve now basically eliminated that reason as being part of the mix, and you can just sort of rinse and repeat that as many times as necessary until you hit the real reason.””

7. ASK WHAT METHOD THEY’VE USED TO JUDGE THE QUALITY OF THEIR REASONS – “ask people to imagine someone has looked at the same evidence and reached a different conclusion, and now a third person is looking at both their arguments—how would that third person determine which conclusion was true?”

8. LISTEN, SUMMARIZE, REPEAT – “In a way, step eight is moving back through all the steps again, reflecting and paraphrasing.”

9. PART COMPANY BY SUGGESTING YOU CONTINUE THE CONVERSATION LATER – street epistemology is about improving people’s methods for arriving at confidence, not about persuading someone to believe one thing more than another. “I have no desire to misrepresent you, so please correct me. I have no desire to straw-man you, so if I get your arguments incorrect, correct me.” Don’t cut them off. Move at their speed. Allow for pauses. Use their meanings and their reasoning. Stay in their head and out of yours.

“At any one time, for any given system, thousands of us are banging away at it hoping to make the difference that changes the world, but no one knows where the vulnerable cluster is at. No one can will the system to cascade for them.”