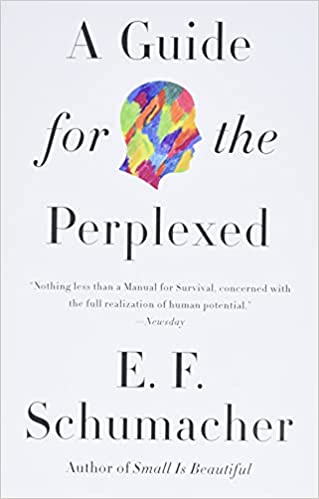 A Guide for the Perplexed by E. F. Schumacher (Book Summary)

In “A Guide for the Perplexed” the economist E.F. Schumacher dismantles the modern materialistic worldview, showing the limits of science and presenting a more holistic map for understanding life. Schumacher presents the four fields of knowledge and four levels of being. Science can only operate in one field of knowledge and can only truly understand the lowest level of being (inanimate matter). Science has provided an invaluable contribution to humanity but what matters most in human life lies in fields in which it cannot operate. A holistic understanding of ourselves and reality requires that we develop and relate all four fields of knowledge to the four levels of being.

*All sentences in quotations are direct quotes from “A Guide for the perplexed” and are attributed to E.F. Schumacher. Bold is added for skimmability.

The problem of Modern Materialistic Scientism

A map for understanding life holistically

The Levels of Being

The Four Fields Of Knowledge

“The four questions which lead to these fields of knowledge may be put like this:

The Unity of Knowledge

Regaining our sense of sacredness and divinity

The True Progression of a Human Being

“What constitutes the true progress of a human being:

One’s third task cannot be tackled until one has accomplished the first two, and is one for which one needs the very best help that can possibly be found: It is “dying to oneself,” to one’s likes and dislikes, to all one’s egocentric preoccupations. To the extent that one succeeds in this, one ceases to be directed from outside, also ceases to be self-directed. One has gained freedom or, one might say, one is then God-directed.”